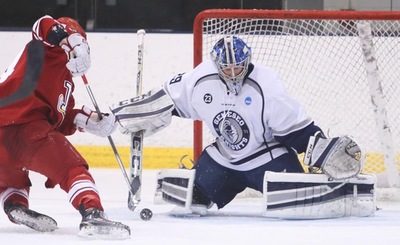 Condon closed his career with the recognition of the second team after reducing the honor of the third team as a Saturday, while Keenan split from a third team’s honor to become the 14th All-American in the history of program.

Condon finished the season for the seventh among SUNYAC defenders with 14 points including eight assists associated with nine. He also voted a SUNYAC First Team All-Star, he scored two goals in the Knights 7-1 victory over Fredonia in the SUNYAC championship and added a goal and a helping hand in two occasions this season, including a 6-2 win at Brockport.

Keenan finished the first season in SUNYAC and joined for 14 in the national team with 39 points, including 18 goals that ranked 14th in the country. He was considered unbeaten at just four of the 29 Knights matches this season, he was scored two goals and helped win 5-2 to visit Buffalo State (3 November), as well as a 7-1 home win to the Canton (3 February), scoring two goals in the 5-2 victory over Potsdam (10 November). Keenan was also named First-Team All-SUNYAC after recognizing the second team and recognizing the Rookie of the Year a season earlier.

Chicago Blackhawks beat the Boston Bruins 3-1 on Sunday afternoon.
We use cookies to ensure that we give you the best experience on our website. If you continue to use this site we will assume that you are happy with it.Ok