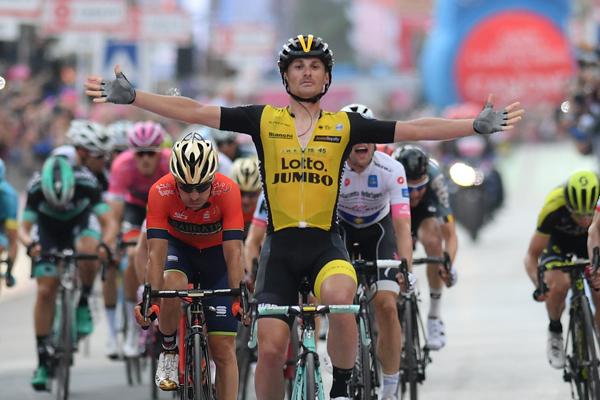 Enrico Battaglin kept the word. At Caltagirone, where he had closed the third time, he swore he would try again.

Enrico Battaglin kept the word. At Caltagirone, where he had closed the third time, he swore he would try again.

And less than 24 hours later, the Lotto NL-Jumbo squad winner made the promise by winning the fifth jubilee of Giro, a 153-kilometer race from Agrigento at Santa Ninfa. The third triumph also for Italy in this edition after two Vivian sprints.

In the final it seemed a bit nervous, but managed to keep another Italian, Giovanni Visconti of the Bahrain-Merida team as well as the Portuguese Gonçalves team Katusha-Alpecin. The third victory at a Giro stage after the successes of 2013 and 2014.

The second Sicilian day has not brought any changes to the overall rankings. Rohan Dennis, well protected by BMC teammates, retains the ruzh blues with 1 second lead over Dumoulin and 17 by Yates. Even Pozzovivo has done a good race, while Miguel Angel Lopez remains behind in 43 seconds, due to a naive crash.

The second stage in Sicily, after 4 of the money in Israel, starts from Agrigento, with a delay due to a very heavy road accident near the launch point. From the start, circumstances favor a small escape of four cyclists, Andrea Vendrame from Androni-Sidermec, Eugert Zhupa of Wilier Triestina–Selle Italia, Laurent Didier and Irish Ryan Mullen of the team Trek-Segafredo. But the group does not leave much to break. The last 2 kilometers are fought, but eventually the winner Battaglin, who thanks to his persistence, passes all over and leaves behind Gonçalves’s Visconti.

On Thursday, the first mountain of Giro’s 101 edition from Caltanisetta in Etna. 164 kilometers strong with an even stronger finish that is expected to highlight the strength of the contestants as it will reach 1746 meters above sea level. /Flashsport24

Canada with fourth medal
We use cookies to ensure that we give you the best experience on our website. If you continue to use this site we will assume that you are happy with it.Ok